When I imagined that I would be skating in rollerderby, I didn’t necessarily imagine that I would be blocking every body hit & skating with the fluid moves of a butterfly: zipping in & out of other girls around me. I guess I thought that it might be a little difficult at first, but with a little time & stick-to-it-ness, I’d be okay. After I invested in all of my equipment, I certainly felt the pressure to make it work. But after 8 weeks of skating 2-3 times per week, neither did I imagine that I would lose my balance & fall when I was just standing on my skates! 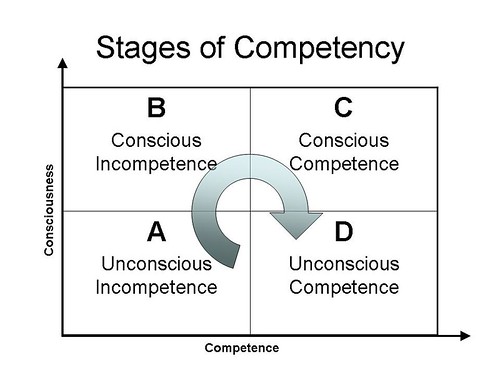 I’m completely in awe of my coaches, Sparkle Plenty & Devil Grrl. They’re both so at ease on their skates. When Sparkle talks, she “paces” in her skates – backwards, forwards, sideways… it’s as if her skates are part of her body. When I was telling Gary about how at ease she is, he reminded me of  the Stages of Competency.

It made me think about learning new skills and how difficult it can be. It doesn’t matter if that new skill is roller skating, or recycling, learning a new language, changing your eating habits (cooking, limiting processed foods, choosing organic or local foods), or exercising. It doesn’t matter – changing behavior is difficult.

The first stage that we encounter is Unconscious Incompetence; we don’t know what we don’t know. This is usually when we get the idea to do something. “I want to learn Chinese!” We have no idea what it takes to become competent at that skill.

The second stage is Conscious Incompetence. This stage is HUGE & so important in changing behavior. At this point, we start to see how much we don’t know. It becomes overwhelming. We know what we’re supposed to be doing, yet, we’re unable to make it happen. This stage is also known as the Valley of Despair. 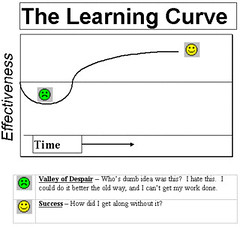 If you’re starting a new habit, I think it’s important to know that you are in this stage. This is the part where we tend to give up on that new skill – lapsing back into our old ways because it’s too difficult to continue. If you knew that you were on the cusp of things getting easier, you might not give up. And it does get easier in the next stage.

Once you pass through the Conscious Incompetence stage, you start to get the hang of things in the Consciously Competent stage. There’s still a lot of attention focused on the activity; you’re thinking about every movement you make, every decision is deliberate & calculated, however, you’re starting to see successes. You think to yourself “I can do this!” and you are doing it.

Be careful when you are in the Conscious Competence stage, as you may go back and forth to consciously incompetence. It can be frustrating, but if you keep your initial motivations for starting the behavior in mind, you can be successful.

What we’re ultimately striving for is the fourth stage: Unconscious Competence (aka: Sparkle on her skates) some of the things that we do that are unconscious competence are driving, tying our shoes, typing.

Try to remember when you were learning a new skill: cooking, using the Internet or Windows for the first time (did I just show my age?) or learning a second language. Remember how it was uncomfortable and confusing. You made a lot of mistakes. Somehow though, through practice & time, it became more comfortable; and now, something that was so difficult is easy. It’s second nature.

So, the next time you find yourself frustrated & find yourself thinking, “Why don’t I just give up? It was easier to do it the old way.” Give yourself some slack. Learning a new habit/skill is difficult. Stick to it, keep your motivation in mind, and with time & practice it will all click.